National celebrations started by a festive opening ceremony on September 2, 2019 in the National Museum Pantheon. It was attended by representatives of Ministry of Education, Youth and Sports, Ministry of Culture, other significant figures of the political life and from foreign embassies, as well as important personalities from academic, social and cultural fields. To Comenius’ honour a concert of classical music was given, played by Capella Regia Praga under the baton of Robert Hugo.

It was aimed at the popularization of Comenius’ personality as reflected in science and arts, and included examples of the mediation of the presented themes by untraditional tools (workshops, artistic performances, an exhibition). Conference speeches will be published in Historia scholastica journal.

Exhibition: Historical portraits of J. A. Comenius and his contemporaries

A liturgical goblet of the Unity of the Brethren from 1564 was the most exclusive exhibit. It is part of the collections of Regional museum in Leszno, and it was for the first time ever that the goblet was lent outside the Polish territory. The goblet was made in 1564 on the territory of Bohemia or Moravia and served to an unspecified Brethren group. It was used by Comenius himself, too.

Exhibition “Learn to Be Wise! Orbis Pictus in the Course of Time”

A joint exhibition of National Museum and Comenius National Pedagogical Museum and Library presented one of the most famous works by the Teacher of Nations. The textbook Orbis pictus was also gratefully remembered by Johann Wolfgang von Goethe himself.

J. A. K.: Comenius in the Cultures of Remembering

The exhibition is one of the contributions by the Czech Academy of Sciences to the 350th death anniversary of Jan Amos Comenius. It will acquaint the broader public with a research in the cultures of memory and Comenius as a symbol and canonic figure in the context of societal, political, artistic and media changes in the 19th and 20th centuries. The exhibition does not claim to create and petrify a certain picture of Comenius, on the contrary, it will present a historical variability and genre diversity of remembering and of forms of collective memory. The exhibition is held under the auspices of the President of the Czech Academy of Sciences, Professor Eva Zažímalová.

To mark the approaching 350th anniversary of his death (1670-2020), the Moravian Provincial Museum is preparing a jubilee exhibition „Comenius 1592-1670“ to take place in Prague Castle Riding School between may 3, 2020 – may 31, 2021. The exhibition will introduce Comenius in a broad context of Czech and European history of his time. It will purposely avoid an obligatory biographical scheme, which in the past mostly concentrated on places attached to Comenius in the chronological order. In biografically conceived exhibition projects up to now, an accent on documenting Comenius‘ life a work prevailed. The exhibition under preparation, on the contrary, aims not only at assembling materials of documentary nature, but also at acquaniting professional and general publics, including the young generation, with new themes in an innovative manner. The concept is based on a new presentation of Comenius, which will intertwine big Comeniological emblems with new scholarly perspectives. It will offer an insight into Comenius‘ life and wider themes of religion history, early modern knowledge and collective identity in fresh contexts and looks, which have the potential to address a broader cultural public in both the Czech and European scales. The exhibition will consist of six parts and it will be based on key phenomena of social and spiritual history of early modern ages as depicted in crative arts as well as in works by significant thinkers. The most important themes mingled in Comenius’ thinking will be remembered here through a big amount of exhibits from both Czech and foreign collections, some of which are to be on display for the first time ever. Comenius will also be presented through the optics of historical tradition and transformation of his legacy of thought over the course of the past centuries. Jan Amos Comenius is one of the central figures of Czech and European cultural memory and one of the firm foundation stones of the national, confessional and professional collective identity. Since the beginnings of his modern reflection, a huge number of fine art, literary and later also theatrical and film representations came into being, which confirmed and retrospectively strengthened his culturally-historical importance.

You can watch video about the exhibition here.

In a modern manner and unique way this exhibition will acquaint visitors with Comenius’ life and work. It is conceived to address all generations, with interactive elements offering a modern insight into the personality of the Teacher of Nations. The exhibition is co-created by Klára Smolíková, author of books for children and youth.

The permanent exposition presents Comenius in the period social and intellectual contexts. Three main thematic scopes – religion, education and politics – show Jan Amos in the light of his efforts for a general remedy of human affairs. The fourth theme, a republic of scholars, places Comenius among foremost scholars of the 17th century. The basis of the trilingual exposition is information provided to visitors in several stages complemented by a system of interactive mechanical and audiovisual elements.+

The opening of the exposition, originally scheduled for March 2020, was postponed to the year 2021 due to the Covid-19 pandemic.

More on the exposition

The Memorial’s tradition reaches back to the beginnings of interwar Czechoslovakia. Its new exposition is devoted to the phenomenon of book print, the essential tool of communication of its time („internet of early modern history“). The Kralice Bible is understood as the foundation stone of new Czech language culture.

The new interactive exposition examines the Unity of the Brethren and the role of J.A. Comenius. Under preparation are accompanying booklets and guidebooks for children. 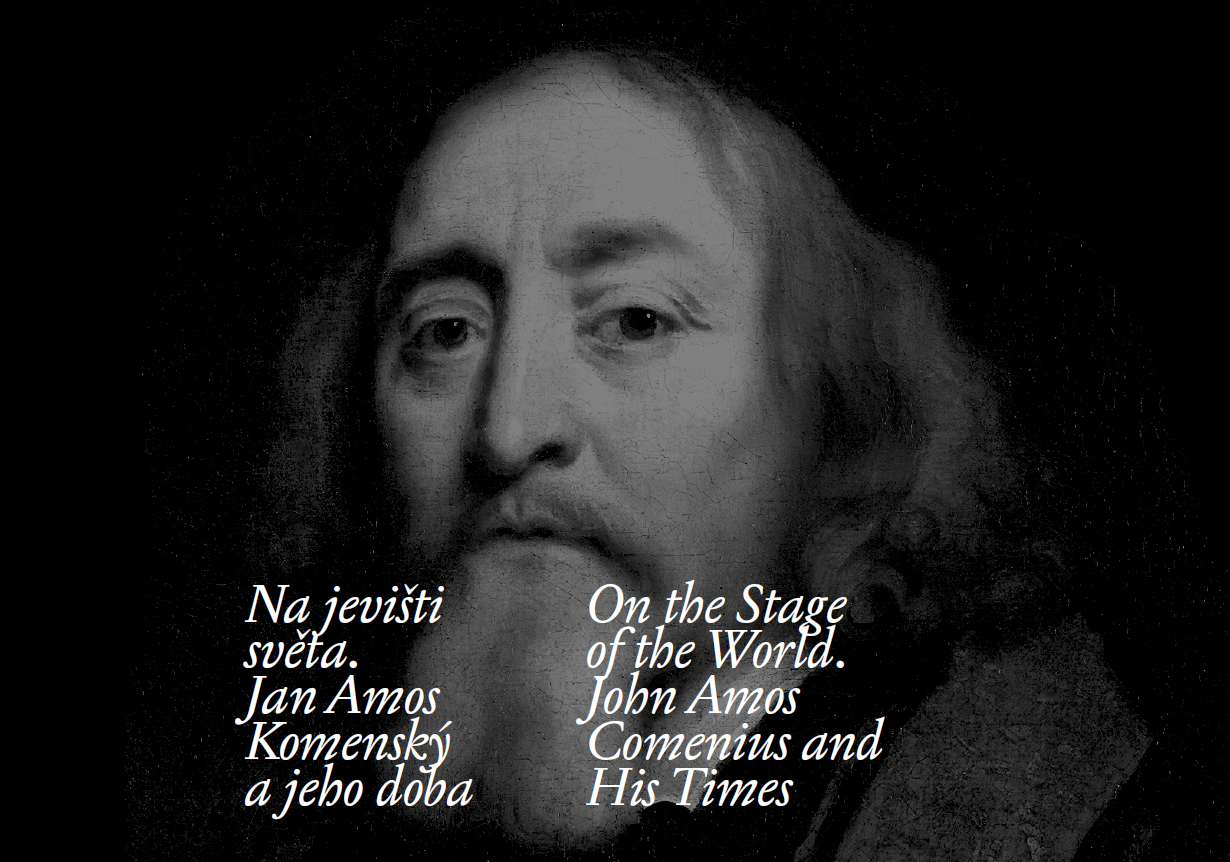 New permanent exposition – On the Stage of the World. Jan Amos Comenius and His Times

Preparation of a new permanent exposition is under way in Comenius Museum at Uherský Brod. It will acquaint visitors with obstacles and possibilities, ways of thinking and conflicts of early modern age, that is the times of Comenius. But the scope is not limited just to the times gone. The legacy of Comenius, perception of his work and Comenius’ position in the modern society is in one way or another reflected in each of the four exhibition halls. Classic exhibition objects combined with the latest new technologies and interactive elements form a three-degree tour depending on a visitor’s age and his prior knowledge of Comenius.

More on the exposition

Between the Labyrinth and the Way of Light: Early Modern Metaphors of Knowledge and Johannes Amos Comenius

In spotlight was the problematics of early modern cultures of knowledge and metaphors of knowledge (labyrinth, light, theatre etc.) – in the context of Comenius‘ works as well as in a broader context reflecting the history of philosophy, art, literature and the history of the 16th and 17th centuries.

END_OF_DOCUMENT_TOKEN_TO_BE_REPLACED
Academy of Sciences of the Czech Republic, Prague

International comeniological conference – Comenius and Pansophia: Search for System, Method and Harmony of All Things

Interdisciplinary conference for experts from the Czech Republic and abroad. The idea of pansophia is one of the basic motives in Comenius’ work and such a widespread stream of thinking in early modern age, that it can be applied to a vast variety of disciplines and themes. The papers will not only be focused on universal wisdom and remedy of human things, but also on interpretation and reception of pansophical ideas as taught by Comenius, his predecessors and successors. The speeches from the conference will later on be published.

Due to the Covid-19 pandemic, the conference was postponed from November 2020 to the year 2021

More on the conference 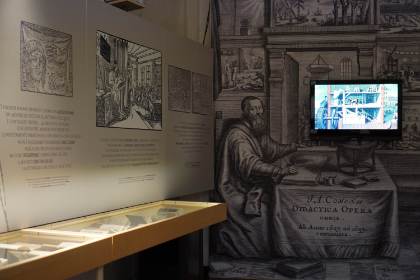 An exhibition organized to mark the 350th death anniversary of Jan Amos Comenius, held in Comenius Museum in Uherský Brod as a result of collaboration with the Czech Centre in Rome and other partners.

The aim of the designer team was to introduce Comenius as a European through contemporary prints of his works with the Labyrinth of the World and the Paradise of the Heart as the key motive.

More on the exhibition

Interdisciplinary conference, a meeting of Comeniologists and editors of Comenius’ works, philosophers, theologians, historians, literature historians and scholars who explore the 16th and 17th centuries. Their papers will be published in the Studia Comeniana et historica journal.